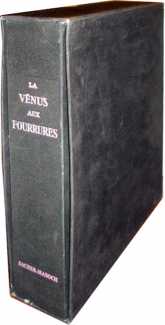 It seems a little odd that while the Marquis de Sade’s works have inspired so many artists and illustrators, the equivalent books of the man who gave masochism its name – Austrian author Leopold von Sacher-Masoch – have resulted in so few creative endeavours. In some of her best work, Suzanne Ballivet made good that omission with twelve powerful colour illustrations for a French edition of Venus im Pelz (in English Venus in Furs).

The story with its themes of female dominance and sadomasochism is semi-autobiographical – Wanda von Dunajew, the novel’s central female character, is modelled on Fanny Pistor, a determined writer Leopold von Sacher-Masoch was fascinated by. The book tells of Severin von Kusiemski, who is so infatuated with Wanda that he asks to be her slave and encourages her to treat him in progressively more degrading ways. At first Wanda does not understand or accede to the request, but after humouring Severin she enthusiastically embraces the idea, at the same time disdaining Severin for allowing her to do so.

The subject matter clearly appealed to Suzanne Ballivet, and the illustrations successfully convey the strange interplay of subservience and domination in Wanda and Severin’s relationship.

The Ballivet-illustrated limited edition of La Vénus aux fourrures was published by Maurice Gonon in a run of 992 numbered copies, of which 150 also included a black and white set of the plates. An appropriate feature of the book’s production is that the slipcase is covered in black suede, so as well as being La Vénus aux fourrures it is also a livre aux fourrure.