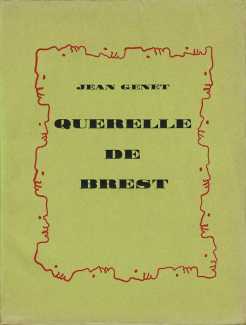 Jean Cocteau first met Jean Genet in Paris in February 1943, and though they were probably never sexually-intimate friends their shared ideas and interests meant that they regularly worked together. That was also the year when Genet’s first novel, Notre Dame des Fleurs, was published, a largely autobiographical account of a journey through the Parisian underworld, in which the characters are mostly homosexuals living on the fringes of society.

When Genet’s Querelle de Brest was first published in 1947, it included a set of illustrations by Cocteau specifically drawn for the novel, though the first edition indicated no name for either author or artist; a second unillustrated edition published later the same year acknowledged Genet as the author. Querelle is set in the Atlantic port town of Brest, where its protagonist, Georges Querelle, is a bisexual thief, prostitute and serial killer who manipulates and kills his lovers for thrills and profit.

Cocteau’s drawings do not specifically illustrate Genet’s narrative, but convey the general themes of the novel. Most are of virile sailors with large genitals, protruding nipples and lots of hair. Though the book includes violent scenes (two murders are committed) the images are never violent, some being positively languid. Comparison with the preparatory sketches for the illustrations suggests that Cocteau toned down the explicit sexuality of some of the images for publication, but that did not prevent action being taken against Genet in July 1954 for indecency and pornography.

The first, anonymous, edition of Querelle de Brest was published in a limited edition of 525 copies in November 1947 by Paul Morihien. A second clandestine edition of 1,850 unillustrated copies followed a month later.

The best English translation of Querelle of Brest is that by Gregory Streatham, published by Faber.

As well as the full set of twenty-nine of Cocteau illustrations, we have included a further two dozen Cocteau sketches from the same period which are in a similar style, several of them clearly alternative – and in some cases more explicit – versions of the published drawings. They all appear in a 2012 blog post about Querelle de Brest by a French blogger posting as Fred’s Museum; you can find the post (in French) here. Fred has also written about other aspects of Cocteau’s art, and about French homoeroticism in general.