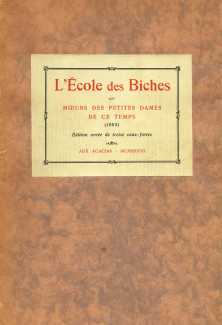 L’école des biches, ou mœurs des petites dames de ce temps (The Girls’ School, or the Habits of Young Women of Their Times) was originally published in Paris in 1863 (dated 1868) by Jean-Pierre Blanche of Brussels, in a limited edition of 64 copies. A rather pedestrian fantasy romp jointly written by three second-rate authors, Alfred Begis, Frederick Hankey and Edmund Duponchel, it resurfaced in the 1920s and 30s in two illustrated editions; this, with by far the most accomplished illustrations, by Luc Lafnet using his ‘Viset’ pseudonym, a second in 1939 with illustrations by Schem (the pseudonym of Raoul Serres).

Lafnet’s thirteen engravings for L’école des biches are explicit, well-executed, and have an honesty and humour about them which are the trademarks of his best work.

The Lafnet-illustrated edition of L’école des biches was published by Maurice Duflou under the deliberately-oblique imprint Aux Acacias: à l’Enseigne de la Crinoline. It includes a preface by Sylvestre Bonnard, a pseudonym of author Pierre Dufay. It was produced in a limited numbered edition of 365 copies.