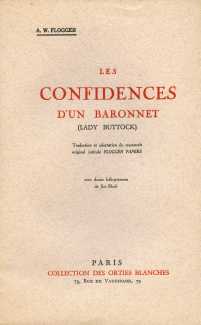 ‘My rump was on fire, and I let myself be whipped voluptuously without shame or response. I took pleasure in the sensation of my flesh being bruised by a despotic desire. O subtle, unforgettable revelation! I flexed under each impact as if drugged in this sexual tournament. Finally, as the countess released her grip, I lifted my eyes up to her swollen with tears, my face tense with pain and suffering. My love!’

Les confidences d’un baronet (The Reminiscences of a Baronet) is one of a series of spanking novels published between 1910 and 1932 by the prolific publisher Jean Fort under the series title Collection des Orties Blanches (White Nettle Collection). Corporal punishment was seen very much, and not without reason, as ‘the English vice’, and many of these books were sold to English businessmen visiting the French capital.

This and its companion volume, Poker de dames, further compound the English connection with the deceit of supposedly having been translated from The Flogger Papers of Lady Buttock, though of course no such English-language originals exist. It also helped that the book, long perceived by the authorities as criminally perverted, was banned in November 1953, a ban upheld by the court of appeal in June 1954.

Fort commissioned Lafnet to produce illustrations for both books, all signed with the pseudonym ‘Jim Black’. Naked buttocks being the artist’s forte, they complement the florid text perfectly.