The 1909 edition includes an introduction and appreciation by A. Normann. In addition to the ten illustrations included in the 1909 edition we have also included here a further six watercolours attributed to Geiger. 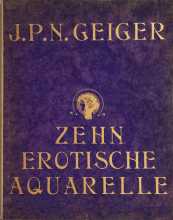 Zehn Erotische Aquarelle was published by Gesellschaft Österreichischer Bibliophilen in a limited edition of 530 numbered copies.