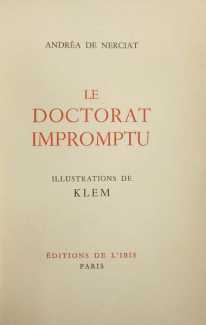 He worked as a secret agent of the French government across Europe, and may also have worked as a double agent, as he was arrested by the French when they invaded Naples in 1798. Le doctorat impromptu (The Impromptu Doctorate) is an epistolary novel published in 1788, consisting of fictional letters between the convent-fleeing nun Erosie and her confidante Juliet as Erosie explores a variety of new-found pleasures of the flesh.

The Klem illustrations, which appear to be his last book commission, have the same sureness of imagination and composition as his earlier work.

The Éditions d’Ibis Le doctorat impromptu was issued in a numbered limited edition of 1800 copies.