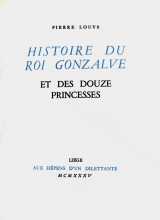 Histoire du Roi Gonzalve et des douze princesses (The Story of King Gonzalve and the Twelve Princesses) is the ultimate transgressive incest fantasy, and it seems significant that both author and illustrator produced their contributions early in their creative careers.

The plot revolves around a king with incestuous desires towards his twelve daughters, each with a name based on the Latin ordinal numbers (Prima, Secunda … ). When Gonzalve hears from the Royal Confessor that the princesses live in constant sinful thoughts, he gives his wife permission to take a pilgrimage, the better to put into practice his criminal intentions. He then summons his daughters, one a night, in order to defile them, only to be surprised by the level of experience they already possess, having been under the tutelage of Lady Chloris, one of the most libertine women in the court. King Gonzalve, the great debaucher, ends up being catechised by his daughters he so much wanted to pollute.

The unfinished manuscript of Roi Gonzalve was among the manuscripts sold by Pierre Louÿs’ widow to the bookseller Edmond Bernard, and later resold to private collectors and clandestine publishers. It was first published anonymously ‘in Madrid’ (though actually Paris) in 1927, ‘aux dépens d’un dilettante’ (‘at the expense of a dilettante’). Its origins, however, date from a period around 1900, when Les aventures du Roi Pausole was published; it would appear that Roi Gonzalve is Louÿs’ much riskier and ‘forbidden’ version of the more acceptable Roi Pausole.

Despite being left unfinished as were so many of Louÿs’ manuscripts, the style of the work shows an aesthetic refinement marked by a lightness and fluidity of the narrative. The story is full of realistic dialogue, and asks the reader many important questions about the nature and boundaries of desire. ‘What distance is there between vice and virtue?’ he asks. ‘The same as between the cunt and the ass – just one little finger.’

The Bécat-illustrated Roi Gonzalve was produced in a limited numbered edition, housed in a slipcase, of 171 copies.

We are very grateful to Talisman Fine Art (www.talismanfineart.com)  for these illustrations.