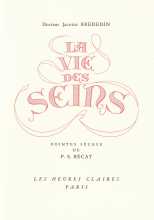 La vie des seins (The Life of Breasts) is a strange volume, designed primarily as an excuse to commission Bécat to produce a series of drypoints illustrating one of his favourite subjects. The pseudo-anthropological text is by one ‘Docteur Jacotus Brededin’, supposedly of the ‘Faculté des Sciences Socio-Psycho-Érotologiques’ in ‘L’université d’Ampelople’. Who it was actually written by is anyone’s guess.

It wasn’t the first time that the learned Doctor Brededin had appeared – in 1917 the author Jacques Morland and the artist Raoul Dufy collaborated on a now-rare parody volume entitled Folourdan, ‘A Satirical Concoction dedicated to André Mary, Burgundian, by Fernand Fleuret, Chevalier, with Remarks by Jacotus Brededin, PhD, Reader at the University of Ampelople, giving Details of the Giant, the Curious Description of his Shoes, his Hands, his Behind, etc., his Journeys, and the Horrible End of his Subjects; all intermingled with Moral Reflections and Quotations.’ Folourdan was published by the Guild of Forgers with an address of the Fourth Pythian Tripod at Delphi.

Bécat’s drawings for La vie des seins are a fine example of his best work, at the same time providing insight into what naked women really looked like in the mid-1950s.

The Bécat-illustrated La vie des seins was published by Les Heures Claires and printed by Raymand Jacquet and Manuel Robbe, in a boxed limited numbered edition of 450 copies.