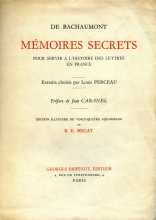 Mémoires secrets pour servir à l’histoire de la République des Lettres en France depuis 1762 jusqu’à nos jours (Secret Memoirs Serving as a History of the Republic of Letters in France from 1762 until the Present Day) is an anonymous chronicle of events that occurred between 1762 and 1787. The historian Dena Goodman thinks it started as a manuscript newsletter emanating from Paris. It was first published in London as a multi-volume set from 1783 to 1789; thus although the entries bear exact dates, they were not published until long after the events they describe. The work is attributed to Louis Petit de Bachaumont (1690–1771), but it is unlikely that he was the actual author, since many events included in the text occured after his death. It is now attributed mostly to Mathieu-François Pidansat de Mairobert and Mouffle d’Angerville, but it is likely that the text is the work of multiple authors including these two.

The Mémoires secrets offer an abundance of details about literary life in the eighteenth century. At the centre of the most brilliant debates for a quarter of a century, whether concerning the battle against the Jesuits, the opposition between the Parlement of Paris and the French king, affairs such as that of the famed diamond necklace, or the emergence of new aesthetics including bourgeois drama, Gluck’s operas and Shakespeare’s plays, they give a day-to-day account of public opinion at the time, sometimes engaged, sometimes distanced, indignant, or sarcastic.

This edited selection of the Mémoires secrets is a clever collaboration between the publisher Georges Briffaut, prolific bibliophile Louis Perceau (here for once using his real name), and Bécat, in his element with a large cast of period characters. Inevitably Perceau and Bécat have chosen the juiciest extracts from the Mémoires, and Bécat has taken every opportunity to introduce naked flesh, but that is exactly what the publisher and its readership wanted. This was to be the first of many illustrated volumes published by Georges Briffaut to be illustrated by Bécat.

The Bécat-illustrated edition of Mémoires secrets was produced in a limited numbered edition of 1,000 copies.