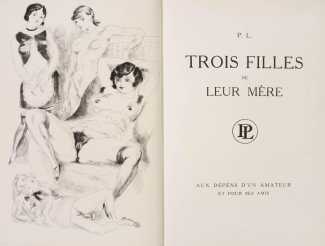 Pierre Louÿs was never afraid of taking risks in his prodigious output, and among the many secret manuscripts discovered after his death, subsequently auctioned off and scattered among collectors, was the manuscript of Trois filles de leur mère (The Three Daughters of Their Mother). In the introduction, Louÿs writes ‘This book is not a novel, it is a true story in every detail. I have not changed anything about the mother and her three girls, their ages, or their circumstances. The narrative is wholly inspired by the free relationship between the author and the wife of José Maria de Heredia and her three daughters.’

Written around 1910, describes in the first person the developing sexual relationships between the writer and a thirty-six year old prostitute, Teresa, and her three daughters, twenty-year-old Charlotte, Mauricette, fourteen and a half, and Lili, ten. The daughters, having learned well from their mother how to please themselves and their client, engage in an amazing variety of sexual exploits.

Just how autobiographical the book is is open to question, though Louÿs’ reference to Teresa de Heredia, whose daughter Louise he was married to for several years, gives it an edge of credibility. Beyond its possible autobiographical value, the work draws its power, its realistic dialogue and its love of transgression from the bourgeois universe to which the author belonged. According to André Pieyre de Mandiargues, who wrote a preface in to a a new edition in 1970 ‘This text is the ideal of the erotic ​​genre, and constitutes masterpiece of Pierre Louÿs’ masterpiece.’ For those who can read French, there is a complete online text of Trois filles here. 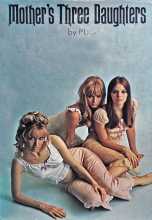 Trois filles de leur mère was first published by René Bonnel in 1927, and by the mid-1930s several illustrated editions had appeared. The first English translation, Mother’s Three Daughters, was published by Grove Press in 1969. The safe cover image gives no indication of the true age of the young participants …

The Berthomme Saint-André edition of Trois filles was published ‘Aux dépends d’un amateur et pour ses amis’ (at the expense of an amateur and their friends); it was produced in an edition of 150 copies, of which 90 included the full suite of illustrations.