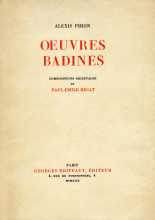 The French writer Alexis Piron (1689–1773) is best known for his plays written for the Comédie-Française, but his early works (Œuvres badines) consisted mostly of poetry, short stories and epigrams, many of them experimental and a little risqué. It is this aspect of his work that suggested to the prolific Bécat-Briffaut artist-publisher team that Piron might be a suitable candidate for such a new volume.

Piron was born in Dijon, and began life as clerk, then studied law, though writing at the same time. In 1719 he moved to Paris, neatly timing his move with a new edict restricting small theatres to performances with only one actor on stage. Most writers for this theatre at the time found this impossible, but Piron was a great success with a piece called Arlequin Deucalion, representing the stages of human development after the Great Flood. He went on to produce several successful comedies, most notably Les fils ingrats (The Ungrateful Children) in 1728.

His most intimate associates were the actress Mademoiselle Quinault and her friend Marie Thérèse Quénaudon, known as Mlle de Bar; he married Mlle Quinault twenty years after first meeting her.

Piron published his own theatrical works in 1758, and after his death his friend and literary executor, Rigoley de Juvigny, published his Œuvres completes.