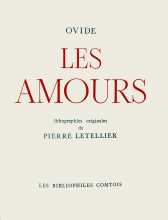 Les amours (in Latin Amores and in English The Loves) is the famous classical author Ovid’s first completed book of poetry, a first-person account of the poet’s love affair with Corinna, an unattainable higher class Roman girl. It was first published in 16BC in five books, but Ovid, by his own account, later edited it into the three-book edition that survives today. It is often subversive and humorous, sometimes exaggerating motifs and devices to the point of absurdity. Some literary scholars have called the Amores a major contribution to the Latin love elegy, but they are not generally considered among Ovid’s best works.

Les amours was published by Les Bibliophiles Comtois in a limited boxed numbered edition of 185 copies.

We are very grateful to Black Club Books for these illustrations.