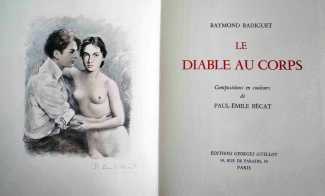 Le diable au corps is the story of a young married woman, Marthe, who has an affair with sixteen-year-old François while her husband is away fighting at the front, and it provoked scandal in a country that had just been through World War I. Though Radiguet denied it, it was established later that the story was in large part autobiographical, but by that time he was dead, falling victim to typhoid at just twenty years old. It is a remarkable work for such a young writer, its central theme being that of hard-hearted sexual gratification in the midst of a chaotic world where everything may end at a moment’s notice. The novel struck a resounding cultural chord, both when it was published and again, tellingly at the end of the Second World War, when the 1948 film of the book was released, starring Micheline Presle as Marthe and Gérard Philipe as François.

The Bécat-illustrated Le diable au corps was published by his ‘regular’ publisher, Georges Guillot, in an boxed limited edition of 1000 numbered copies.