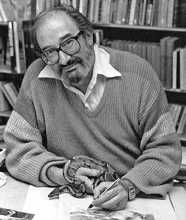 The French artist Gérard Gachet was born in Morocco while his parents were living there, then moved with his family to Paris, where he spent a year at the École des Beaux Arts, followed by two years at the École des Arts Decoratifs in Strasbourg. After working in theatre design for three years he took a teaching post in Metz, before deciding in 1965 to settle in Strasbourg and concentrate on his own artistic work.

Rejecting conventional drawing techniques, he normally worked with a ballpoint pen, achieving a softness of line which no ordinary pen could give him, or with fine-tipped charcoal. He also produced lithographs and zinc engravings, but his growing interest in halftones made drawing his favourite medium. On average, each drawing represented a month’s work.

A lifelong insomniac, Gachet did the painstaking preparatory work for his drawings at night or in the early hours of the morning, when his sensitivity and perceptions were heightened. He often went out fishing before settling down to work. This early morning contact with nature played an important in his work, and he was passionately interested in ethology, entomology and mineralogy – to a large extent it was his love of nature which he explored and magnified in his art. He was particularly fond of snakes and other reptiles, loving them for their beauty, the feel of their scales, and the quality of his response to them.

When asked how his work fitted into the trends in art, he was happy to be called a magical realist, though critics often placed him in the Surrealist camp, and in 1968 he participated in an exhibition of Alsatian Surrealists in Strasbourg.

His best work depended on emotional and moral calm, and was never richer than when he made his home beside a pond and went fishing every day, or when, in his last years a woman brought him the emotional stability he needed so desperately. He also loved laughter and good food, and was always surrounded by friends, books and animals. In 1980 he went back to teaching at the École des Arts Décoratifs in Strasbourg, and gave generously of his time to those few pupils in whom he sensed true originality.

Though his work is charged with a carnal, animal, natural sensuality, and is sometimes violent, it is never cruel. Skulls and skeletons, the symbols of death, haunt many of his drawings alongside women’s breasts, buttocks and vulvas, the source of life and a subject he found eternally fascinating. Reptiles, seashells, cliffs and sailing ships also feature regularly.

Gérard Gachet’s son Christian, born in 1959, is a well-known doctor and researcher specialising in pharmacology.

A website dedicated to the life and work of Gérard Gachet, curated by his friend the filmmaker and author Jean-Pierre Bouyxou, can be found here. 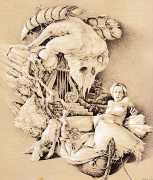 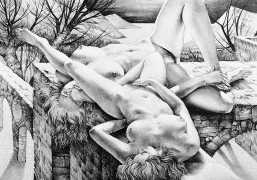 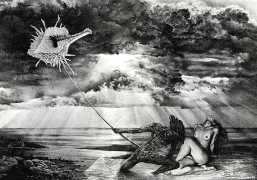 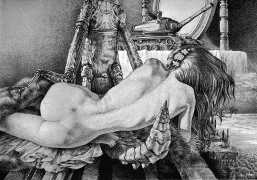 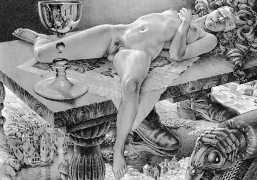 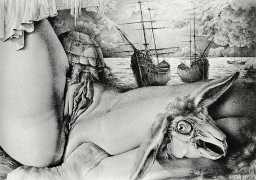 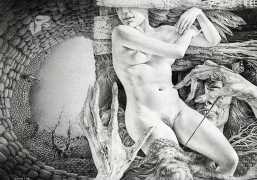