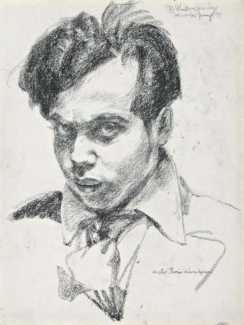 We know tantalisingly little about Nicolas Sternberg, a highly original and prolific artist working in Paris from the 1920s onwards. He grew up in Nagyvárad, now the Romanian city of Oradea but then part of Hungary, and starting in his teens became a regular contributor of illustrations to several Hungarian newspapers. After studying art in Budapest and Munich he settled in Paris in 1921, producing and selling drawings including portraits and a large number of nudes.

In 1930 the critic André Warnod wrote an extensive and very positive review of Sternberg’s work being exhibited at the Georges Petit Galerie in the magazine l’Art et les Artistes.

Sternberg’s too-short entry in the 2003 directory Autour de l’art juif (All About Jewish Art) tells us that in 1940 Sternberg miraculously escaped an aerial bombardment which resulted in the deaths of several members of his family. As a Jew in Paris, he was in hiding with false papers during the German occupation. This suggests that he was not single and had children; the only records from the time which appear to match this are entries for a Rosa Sternberg, born in Budapest in 1919, and a Jewish child Léon Sternberg.

In October 2003 the Paris auction house Millon sold a large quantity of his work, consisting mostly portraits of women and circus performers.