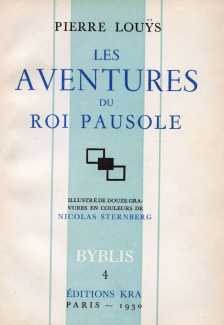 Sternberg’s twelve brightly-coloured plates match Louÿs’ text perfectly, with the king, many of his 366 wives, his daughter Aline and her lover Mirabelle all clearly enjoying their lives in the Mediterranean paradise of Tryphême. The camels and zebras are an added delight.

The Sternberg-illustrated Pausole was published by Éditions Kra in a limited numbered edition of 3,300 copies.