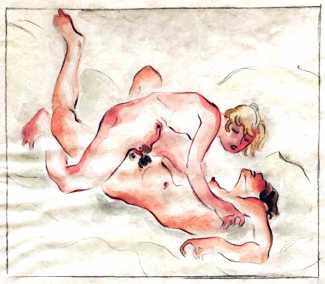 When Erika Plehn created these watercolour scenes for Pierre Louÿs’ irreverent parody of sexual manners, it had only just been published in Paris, so she was among the first in Berlin to enjoy its clandestine pleasures. And it clearly struck a chord in the young artist, resulting in these seven illustrated quatrains and the three attendant watercolours captioned ‘Schule der Aspasia’ (Aspasia, allegedly bisexual, was the influential lover and partner of Athenian statesman Pericles), all housed in a card portfolio. Plehn’s watercolours were never published, so exist in just this one set of paintings which came to auction in the early 1980s.

Even more clearly than in the Intimité of a year earlier, sex was very much on the mind of the young Erika, and in various combinations including both heterosexual and lesbian intimacies. We shall never know whether she experienced such delights in her own life, but just a few years later she was married to a Lutheran priest.

As Geoffrey Longnecker writes in the introduction to his English translation of Pybrac, ‘The briefest of glances at Pybrac will make it apparent that there were many things that Pierre Louÿs did not like to see – a prudishly squeamish framework to these quatrains that, however ironic, provides an argument against their constituting pornography. Be that as it may, there is little question that Pybrac is one of the filthiest books of poetry ever published. Like the rest of Pierre Louÿs’ voluminous output of erotica, Pybrac was not published during his lifetime, but instead figured among the many secret manuscripts discovered after his death, tucked and filed away, and subsequently auctioned off and scattered among collectors. It would see its first publication in 1927 (in an edition of 105 copies), two years after the author’s death.’