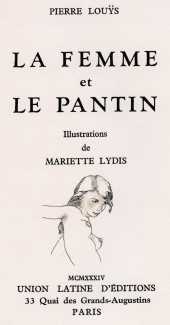 La femme et le pantin (Woman and Puppet) was one of the two Pierre Louÿs titles for which the Paris publisher Union Latine d’Éditions commissioned artwork from Mariette Lydis, the other being his best-known novel, Aphrodite: mœurs antiques (Aphrodite: Ancient Morals).

Partly autobiographical, Louÿs’ 1898 Spanish-themed romantic novel tells the story of the impressionable young Frenchman André Stevenol, who meets Andaluz beauty Conception ‘Concita’ Perez at the Seville Carnival; they exchange ‘certain looks’ and arrange to meet again. When André shares his experience with his friend Don Mateo, he learns that Mateo has had previous dealings with Concita, and Mateo warns André to stay away from the young women whose puppet he had become.

Mariette produced eight stylish illustrations and a monochrome tailpiece for the Union Latine edition. Louÿs had an admiration for strong women who could meet their lovers on equal terms, as did Mariette Lydis, so text and illustrations are well-matched.