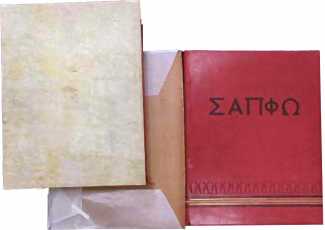 Mariette Lydis’s second portfolio of lesbian engravings, Sappho, was published in 1933, ‘aux frais d’un groupe d’amateurs’ (at the expense of a group of amateur collectors). A more substantial production than Lesbiennes (which had a handwritten title on the cover), Sappho consisted of fifteen monochrome prints depicting women lovers, presented in a red embossed folder; the number of copies produced is unknown, but is probably less than a hundred. As many of the sets of engravings would have been separated over the years, complete portfolios of Sappho are now extremely rare.

Sappho was a first-century poet who lived on the Greek island of Lesbos; very little of her work survives, but both her name and that of her island home have become indelibly associated with same-sex love between women.

As with Lesbiennes, we have not been able to source the complete set of engravings for Sappho; we would like to include a definitive complete set of high-resolution images, so let us know if you can help.