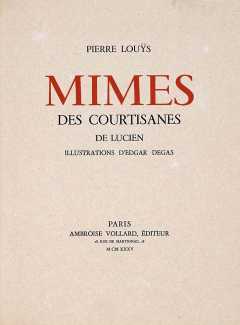 The second illustrated title chosen by Ambroise Vollard to be accompanied by a selection of his Degas monotypes was Pierre Louÿs’ retelling of Lucian’s Mimes des courtesanes (Dialogues of the Courtesans).

Living at the height of the Roman Empire, the audience Lucian wrote for was hardly shocked by these short dialogues between Greek prostitutes. However, two millennia of ensuing prudery made it impossible to acknowledge this part of the Lucian corpus, a set of humorous vignettes set in the context of the ‘oldest profession’, let alone translate it into a vernacular language. The comic sketches are timeless: working girls competing for clients, dishing gossip and candid tips of the trade, men trying to keep their girls’ attention with expensive gifts. It also portrays the dark side of the prostitutes’ lives: out-of-control parties, blowhard men, and putting up with rough treatment by clients. The hetaerae of Lucian were not constantly wondering whether their next client was going to flash a badge and haul them off to jail – sex workers in antiquity were just another occupation, like the butcher, the baker and the sandal maker. At that time, pagan temples throughout the eastern Mediterranean had sacred prostitutes, and patronising them was considered a sanctified act. The hetaerae actually had a lot more freedom than other women in Greek society.

This was a much easier text to illustrate than La Maison Tellier, as there is no real narrative; this allowed the Ambroise/Potin/Aubert team to use the best of the remaining Degas prints. The observant eye will notice that a couple of the prints from La Maison Tellier have been reused with slight differences for the Lucian volume; there was no point letting a good resource remain underused.

The Degas-illustrated Mimes des courtesanes was published by Éditions Ambroise Vollard in a limited numbered edition of 325 copies.