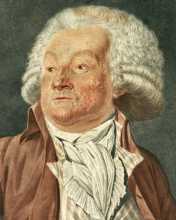 Honoré Gabriel Riqueti, comte de Mirabeau, is best known as a moderate figure in French history during the revolution of the late eighteenth century, favouring the establishment of a constitutional monarchy based on the British model. When he died in 1791 he was a national hero, but it was later discovered that he had been in the pay of King Louis XVI. 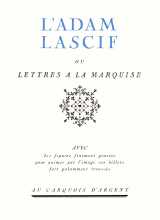 A taste from one of the letters:

‘Do you know, dear Marquis, how much I yearn furiously for you, to an extent you cannot possibly suspect, and to which the absence of news from you heightens to an almost impossible extreme? I am dying to undress you in my imagination, to caress you a thousand ways, pretending that I make you swoon without swooning myself. I no longer have even the possibility of instructing the chambermaid I told you about: the beautiful girl fled the other week with a troop of travelling comedians.

‘Just now I knew for a moment that the day was approaching when our charming Eve and mad Adam were going, alas, to be ejected from their earthly paradise. I do not know what the snake had already told your ancestor, but it spent long hours dreaming langorously on the moss. It looked as if she no longer displayed the same lively enjoyment in caressing and sucking the fine life of her lord and master, and was no longer in same haste to receive the plump baguette in her juicy cunt.’

L’Adam lascif was seized by order of the Court of Assizes of Paris on May 29, 1956 and for a while became one of many such banned volumes, which made it even more attractive to collectors.

The Au Carquois d’Argent edition of L’Adam lascif was produced in a limited numbered edition of 250 copies.